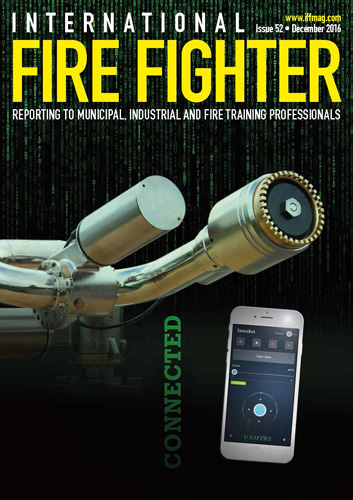 The December 2016 edition of International Fire Fighter Magazine features the FlameRanger XT, Unifire’s solution for the automatic fire detection and suppression of fires that develop on high-rise building exteriors.

The article, entitled, “Swedish Solution for High-Rise Building Fires”, explains the FlameRanger XT system, and is published here with permission from MDM Publishing.

Swedish fire fighting nozzle specialists, Unifire AB, have developed what may very well usher in a new era in fire fighting: a fully automatic fire detection and extinguishing system, called FlameRanger™. The system, according to Unifire, is capable of detecting and extinguishing a fire in seconds of its breaking out, with minimal use of water, and without any human intervention required.

Unifire has specifically designed a special version of the system, called FlameRanger XT™, to protect the exteriors of high-rise buildings that are at a particularly high-risk of fire due to the material used in the exterior panels—a continuing problem that has been linked to a number of devastating high-rise exterior fires in the UAE and elsewhere.

Unifire spokesman, Roger Barrett James, explains that, “Fire grows exponentially—all fires start out small, but then grow extremely quickly as long as they have oxygen and a fuel source. If you can both detect a fire and begin extinguishing it right away with a high volume of water, directly at its source, then you not only maximize your chances of successfully extinguishing it, but you also minimize damage and use the least amount of water or agent necessary to extinguish the fire.”

The FlameRanger was designed specifically to achieve both of these goals—fast detection, and fast suppression. Full-scale tests of the system have proven the technology to be astonishingly effective, and Unifire indicates that the system is now available on the market, ready to be installed on high-risk buildings and in a wide-range of other applications, including the protection of oil & gas facilities, aircraft hangars, tunnels, warehouses, stadiums, factories, and other large-volume spaces, both on- and off-shore. 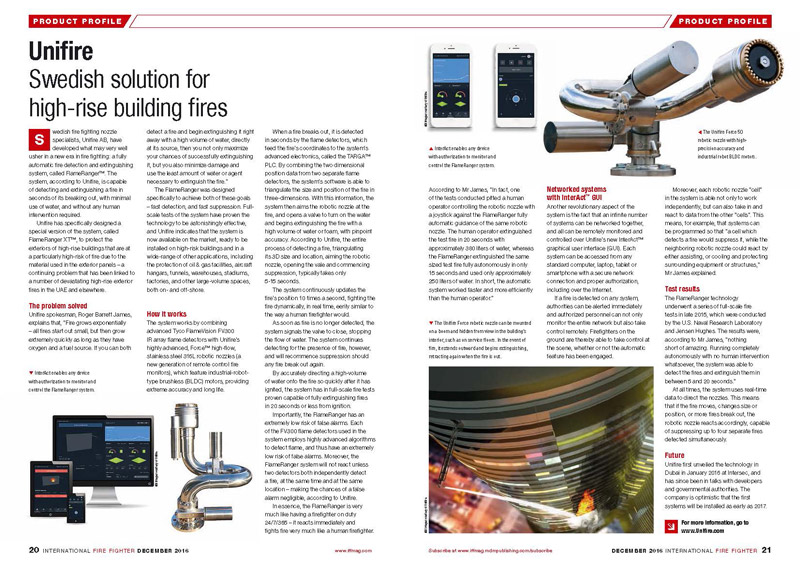 When a fire breaks out, it is detected in seconds by the flame detectors, which feed the fire’s coordinates to the system’s advanced electronics, called the TARGA™ PLC. By combining the two dimensional position data from two separate flame detectors, the system’s software is able to triangulate the size and position of the fire in three-dimensions. With this information, the system then aims the robotic nozzle at the fire, and opens a valve to turn on the water and begins extinguishing the fire with a high volume of water or foam, with pinpoint accuracy. According to Unifire, the entire process of detecting a fire, triangulating its 3D size and location, aiming the robotic nozzle, opening the vale and commencing suppression, typically takes only 5-15 seconds.

The system continuously updates the fire’s position 10 times a second, fighting the fire dynamically, in real time, eerily similar to the way a human firefighter would. 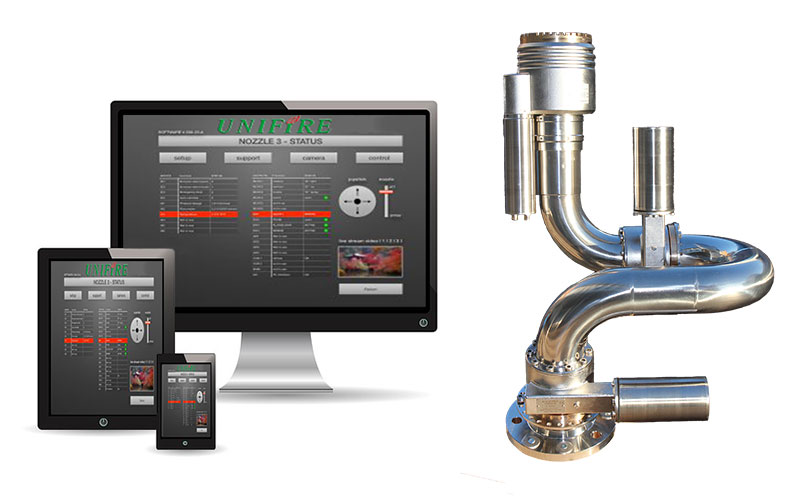 As soon as fire is no longer detected, the system signals the valve to close, stopping the flow of water. The system continues detecting for the presence of fire, however, and will recommence suppression should any fire break out again.
By accurately directing a high-volume of water onto the fire so quickly after it has ignited, the system has in full-scale fire tests proven capable of fully extinguishing fires in 20 seconds or less from ignition.

Importantly, the FlameRanger has an extremely low risk of false alarms. Each of the FV300 flame detectors used in the system employs highly advanced algorithms to detect flame, and thus have an extremely low risk of false alarms. Moreover, the FlameRanger system will not react unless two detectors both independently detect a fire, at the same time and at the same location—making the chances of a false alarm negligible, according to Unifire.

In essence, the FlameRanger is very much like having a firefighter on duty 24/7/365—it reacts immediately and fights fire very much like a human firefighter. According to Mr James, “In fact, one of the tests conducted pitted a human operator controlling the robotic nozzle with a joystick against the FlameRanger fully automatic guidance of the same robotic nozzle. The human operator extinguished the test fire in 20 seconds with approximately 380 liters of water, whereas the FlameRanger extinguished the same sized test fire fully autonomously in only 15 seconds and used only approximately 250 liters of water. In short, the automatic system worked faster and more efficiently than the human operator.” 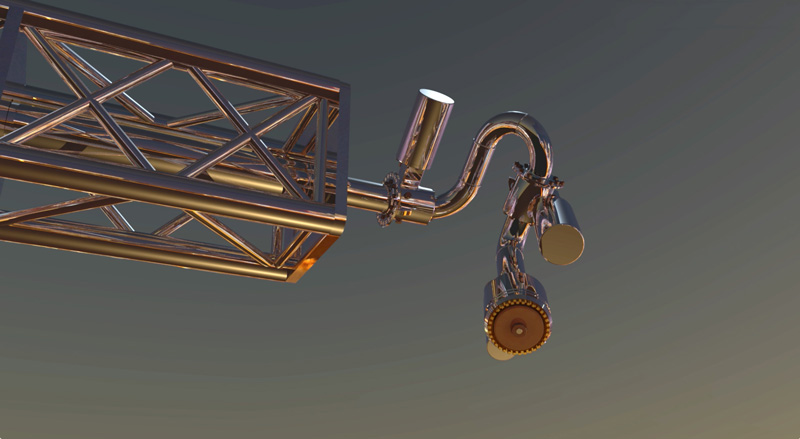 Another revolutionary aspect of the system is the fact that an infinite number of systems can be networked together, and all can be remotely monitored and controlled over Unifire’s new InterAct™ graphical user interface (GUI). Each system can be accessed from any standard computer, laptop, tablet or smartphone with a secure network connection and proper authorization, including over the Internet.
If a fire is detected on any system, authorities can be alerted immediately and authorized personnel can not only monitor the entire network but also take control remotely. Firefighters on the ground are thereby able to take control at the scene, whether or not the automatic feature has been engaged.
Moreover, each robotic nozzle “cell” in the system is able not only to work independently, but can also take in and react to data from the other “cells”. This means, for example, that systems can be programmed so that “a cell which detects a fire would suppress it, while the neighboring robotic nozzle could react by either assisting, or cooling and protecting surrounding equipment or structures,” Mr James explained.

The FlameRanger technology underwent a series of full-scale fire tests in late 2015, which were conducted by the U.S. Naval Research Laboratory and Jensen Hughes. The results were, according to Mr James, “nothing short of amazing. Running completely autonomously with no human intervention whatsoever, the system was able to detect the fires and extinguish them in between 5 and 20 seconds.”
At all times, the system uses real-time data to direct the nozzles. This means that if the fire moves, changes size or position, or more fires break out, the robotic nozzle reacts accordingly, capable of suppressing up to four separate fires detected simultaneously. 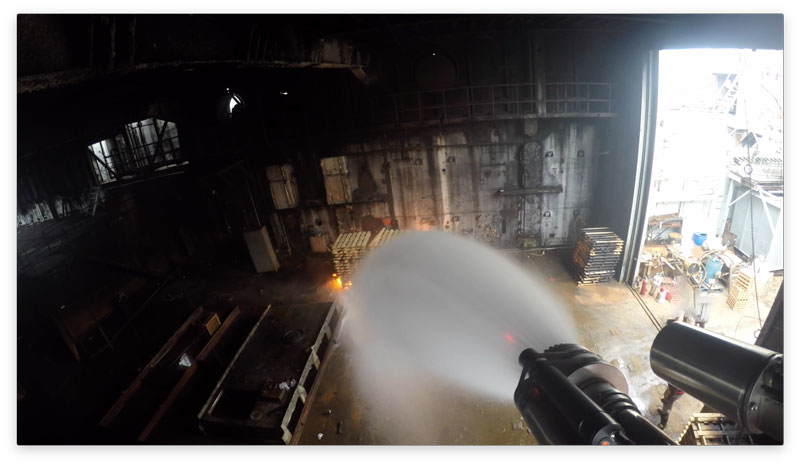 Unifire first unveiled the technology in Dubai in January 2016 at Intersec, and has since been in talks with developers and governmental authorities. The company is optimistic that the first systems will be installed as early as 2017.

More information about the FlameRanger is available at Unifire’s web site devoted to the system at AutomaticFireFighting.com. Unifire’s main website is at Unifire.com.