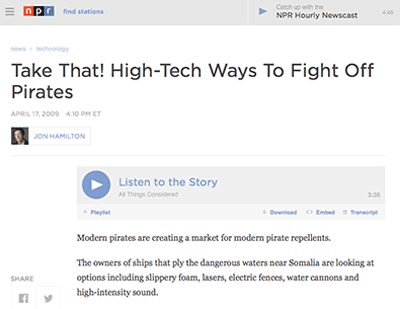 National Public Radio’s John Hamilton interviews Unifire AB, a Swedish manufacturer of advanced robotic nozzles for the protection of ships, yachts and marine vessels from attacks by pirates and hijackers.

Here is the transcript of a portion of the interview that was broadcast world-wide:

As NPR’s John Hamilton reports, they’re ready to try just about anything except old fashioned guns.

JOHN HAMILTON: Most shipping companies still don’t want guns on their vessels. Crews aren’t trained to use them, they’re dangerous if you’re carrying stuff that burns, like oil or gas. And many ports refuse entry to armed ships. But there are other approaches. Crews have already shown that a blast from an ordinary fire hose can discourage an unwelcome visitor.

And now they can use the Force 80 Anti Pirate Water Cannon.

HAMILTON: Roger Barrett James is with the Swedish firm Unifire, which makes the Force 80. He says it’s no ordinary squirt gun. It has a three inch nozzle that can send 1,400 gallons a minute, 100 yards in any direction.

Mr. JAMES: It is a tremendous force of water and will knock over anything in its path and can also flood a pirate’s ship very quickly.

HAMILTON: And since it works by remote control, pirates can’t easily shoot the operator.